Since the onset of the financial crisis in late 2007, the Federal Reserve has used interest-rate cuts and other policy tools in an effort to fuel economic growth. Economists can debate the effectiveness of these policies, but everyone can agree that today’s low interest rates are a two-sided coin.

Consumers, businesses, and government all benefit from low borrowing costs. But on the other side, savers and investors earn almost nothing on their cash balances. This has been the case in most months since 2008, when the Fed cut short-term interest rates to near zero. Worse still, investors are actually losing wealth in real terms. The inflation-adjusted yields on short-term Treasury securities have been negative in most months since October 2010. (Nominal yields reflect the stated interest rate, while real yields are adjusted for inflation.)

Earning negative real yields on short-term fixed income is not unprecedented, as shown in Figure 1. In fact, inflation has exceeded nominal interest rates in several post-war periods. This graph plots nominal and real yields of one-month Treasury bills, which are considered the equivalent of cash. The gap between the two lines is the inflation rate. 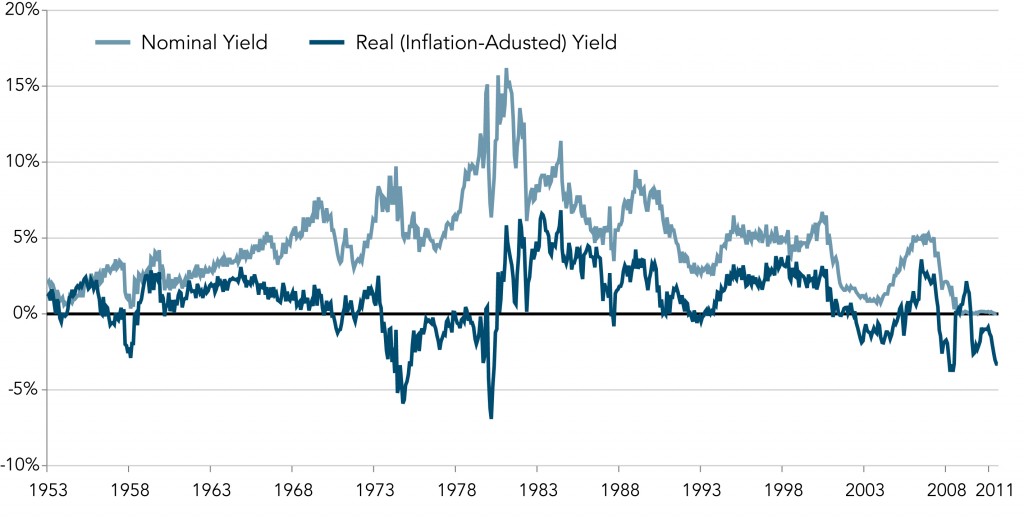 You may note that some negative real yields have occurred during recessionary periods, when the Fed was cutting interest rates to spur a recovery. These times also may occur when investors are most tempted to flee the capital markets for the perceived safety of cash. Investors may have a host of reasons for their flight—some might want to avoid economic uncertainty or stock market volatility, while others might fear that impending higher interest rates will cause bonds to lose value.

This is the case for many individual investors and professional money managers today. They are reportedly shifting their portfolios to money market funds and other cash instruments with the intent to return to stocks and bonds when the economy shows signs of improvement.1 The problem with this strategy is that no one can consistently time markets, and the signs are never clear. So while investors sit in cash, their purchasing power quietly erodes.

Investors may have good reasons to hold cash—for example, to keep a portion of their assets liquid. But they should understand that holding cash has a price in real terms. Investors ultimately may lose wealth even as they try to protect it.

Past performance is no guarantee of future results.